"And Then She Woke Up"

On Neil Gaiman's 42nd birthday he received the gift of a quilt from a fan (me!), based on Sandman artwork by Vince Locke. It seemed only appropriate, being a Douglas Adams admirer, that the answer to life, the universe and everything should be so honored (that, and I didn't have anything nearly presentable for his 40th birthday, which would seem the more obvious milestone).

Now, I like to think of myself as a friend of Neil's, but it still sits a bit awkwardly to give such an enormous gift to someone I'd only see a couple of times a year. It's not like we had grown up together, or gone to the same schools, or hung out in the same neighborhood. He was the writer, and I was a great admirer of his work (and he seemed like such a nice bloke). But I did make this quilt, with the full intention to give it to him. This is how I reconciled the situation (paraphrased for brevity):

someone else: "um, I think it's upside down"

me: "I was thinking it would be a cool idea to auction it off for the CBLDF" **

After some months at Neil's house, on Neil's bed, being sat on by Neil's cats, the quilt made its way to San Diego for Comic-Con International, where it was auctioned off for the CBLDF**. The $2,600 bid was awarded to Miss Heather Henson (yes, of those Hensons), to whom I am eternally grateful for a story she told me of a quilt given to her father by a fan. It was the best payment I could have wished for.

More photos from Comic-Con will be posted as I get them developed. In the meantime, here's what Heather got (with an apology for blurred images, though the impressionist style of the quilt really makes the blurs a plus for viewing): 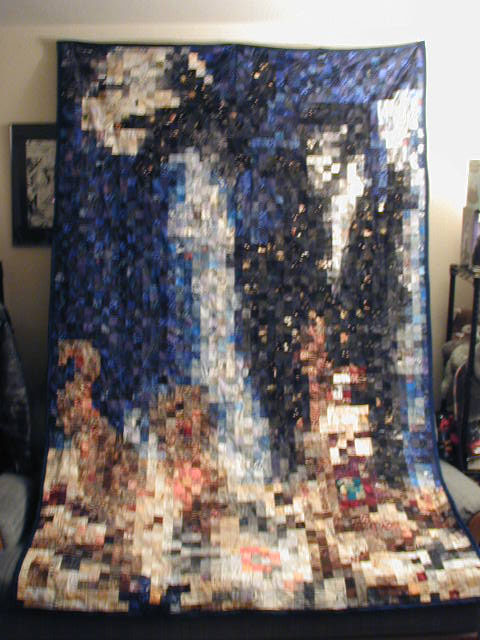 Any questions, comments, requests for your own quilt (avg. waiting time is about 5 yrs); email me.

** for the uninitiated, CBLDF stands for Comic Book Legal Defense Fund, an organization which protects the First Amendment rights of comics, comic book artists and writers, and which deserves your patronage. Go visit their website and learn more about them.

For more on what makes Michelle tick, check out the rest of her website here.